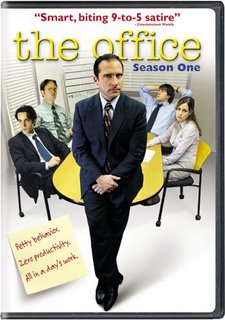 So recently I went into my local Best Buy...well one of my local Best Buys because I have two that are about 4 miles apart. Anyway, I started checking out all the awesome TVs that I can't afford and then I started perusing through video games.

For some reason I began to start checking out television shows on DVD. Soon enough my wonderful fiance, Kristin, showed me a copy of the Office, Season One for just $10.99. I thought, "hmm...that's pretty cheap." Then she looked at the other copies and the all said $23.99 except for one that said $9.99. I pointed out there must have been an error...in our favor.

I took the DVD to the register and when the cashier said $25 and some odd change, I acted confused and then pointed to the price tag on the box. Without saying a word, she went and got her manager. Her manager came over a couple of minutes later and said, "Okay, that will be $10.55 (after tax)". I handed over my gift card and a couple of bucks in cash and I became the proud new owner of the DVD at least than half of the retail price.

The DVD is wonderful. These were all episodes that I have never seen. I hopped on the bandwagon this season, I will admit it. They have deleted scenes and commentary. The only annoying thing is that you cannot move through one of the episodes quickly as they are each one chapter.
Posted by Jimbag at 7:56:00 PM